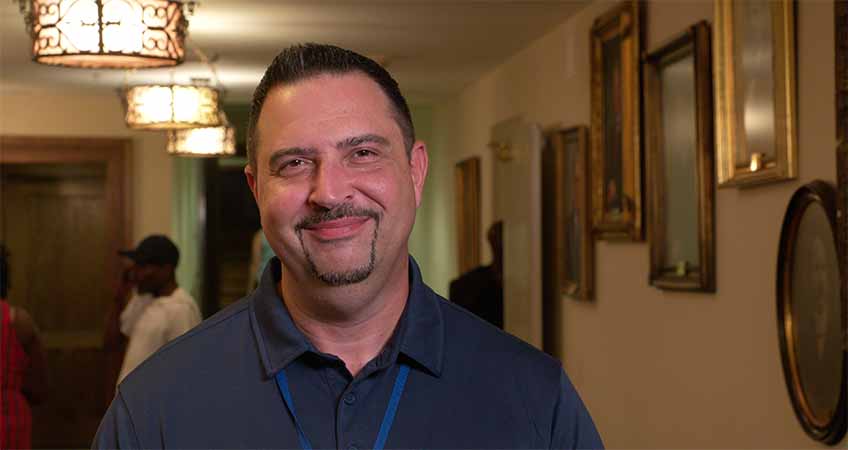 John Guglielmino: A Passion to Help the Homeless in Norfolk

John Guglielmino has worked in the field of human services for 16 years. In his role with the Norfolk Community Services Board, he assists people who are experiencing homelessness and works to help them obtain housing.

He has a passion for helping people that stems from his own experiences with homelessness. As a young child in New York, both of his parents died leaving him to spend a lot of time in foster homes and group homes. “I was essentially a street kid from the time I was a young person to my teenage years,” Guglielmino explained.

His ticket out was the military. After serving in the Navy, he returned to school planning to eventually practice law, but his career path led him into human services instead. When Norfolk’s Freemason Street Baptist Church first explored starting a street choir, they reached out to the city for advice. That’s when Guglielmino connected with them, and he’s had a front-row seat to watch the choir grow and become a family for many of its members.

“The development of the sense of community–a place where you belong, a place that feels like home where you’re around people that know you that understand you, that love you– I think seeing the development of this family spirit and the love that’s associated with all that has been the best part of all this,” he said.

He has watched as strangers gathered for breakfast each Friday and then stayed for choir rehearsal. As they have practiced and performed together, they’ve formed bonds and friendships that can be difficult to find when one is experiencing homelessness.

“One of the things that a lot of folks living on the street go without on a day-to-day basis is positive human interaction and contact,” Guglielmino explained. “And by that I mean most of the interactions they get is derisive looks, condescending attitudes or comments, so I would say the first and foremost thing the choir provides is a safe place for people to be themselves. They are welcomed and they don’t get the attitudes that they might get from the community at large.”

He said homeless individuals also face many misconceptions people have about them. Some conclude that their situation must be their fault and could be remedied if they would only “act better,” but the reality is that many factors contribute to homelessness. While some of his clients deal with mental health or substance abuse issues, others have merely fallen on hard times through a job loss or the loss of supportive relatives. Many also face other difficult barriers including the high cost of housing in Norfolk and working to overcome a criminal background or poor credit.

It can be especially tough for women who are experiencing homelessness as Norfolk has very few beds in shelters for women compared to the number available for men.

“I would like to see people advocate for more shelters in this area,” he said, “and not only that, but shelters specifically for single women out there who are subject to all sorts of other issues that men may not be subject to while out on the street.”

Though there are always more people to help, Guglielmino said he is proud of the progress that has been made in the city of Norfolk. He points to numerous case workers, organizations and volunteers who are all working together to make an impact.

“Even if people don’t necessarily see it or know it, there’s a lot of wonderful people doing work out here to help people get off the street,” he said. “It’s tough work, but there’s nothing better at the end of the day than when you know that somebody has a set of keys in their hand. There’s not a better feeling than knowing how that changes people’s lives.”

If you or someone you know is experiencing homelessness, call the Regional Housing Crisis Hotline at 757.587.4202.
Learn more ways to help.