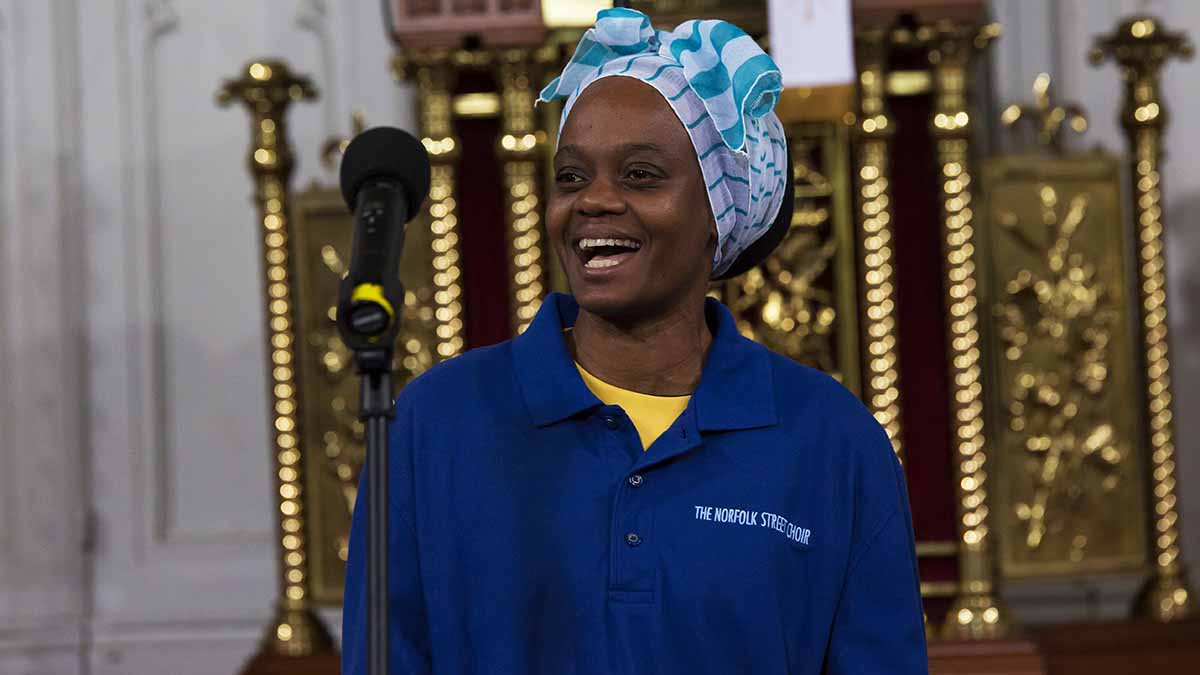 How Nadine Found Her Voice

Nadine F. has a beautiful voice, but she hasn’t always realized it. A native of Africa, she grew up doubting that she could sing because whenever she did, a family member stopped her. “I really thought I was bad at singing,” she said.

As a teenager, she was a good dancer and decided she wanted to become a singer as well to be like pop stars that she had seen. She asked her father to send her to an academy in Africa where she could study the arts, but he suggested she stick with science because she had been doing well in that area in school. “So then I failed on purpose,” she recalled with a laugh.

But her rebellion was short-lived. She eventually earned a scholarship and went abroad to study in Turkey. While she was there, she joined a choir.

“The first year I had to learn Turkish,” she said. “The second year, because I was studying computer engineering, they made me learn English. It was easy for me because I had the choir. I had to learn all these songs and sing them, so it was a piece of cake. I spoke English before anyone in my classroom.”

After getting married, she and her husband moved to the United States when she was 25. However, the relationship ultimately turned abusive and she fled to Turkey. During her first Thanksgiving and Christmas without her children, she said she became depressed. Alone in her hotel room, she prayed that God would end her pain.

“I said, ‘God, won’t you just take me like he took Enoch [in the Bible]. I can just sleep to Heaven,” she recalled. “So I made all my prayers. Here I am knocking at the door, ready to come home. I waited for five days and it didn’t happen. He didn’t answer that prayer.”

Instead she felt like God told her to write a song. She went on to write several other songs that she said were inspired by Him–one of them on the topic of homelessness.

“I was really distrubed to have that song,” she said. “I asked, ‘Why am I singing this? Why am I writing this?’ And then when I became homeless and I looked back, I thought, ‘God, you knew all along that I was going to be here, so you gave me that song.’”

It was during this period of homelessness that she discovered the Norfolk Street Choir. She was hesitant when people first encouraged her to check it out, but once she did, she was hooked.

“I came here and I fell in love with it,” she said. She was surprised by the deep sense of community that developed among the choir members. After becoming a member she not only found acceptance, but she found a new confidence when she was given a solo for an upcoming performance.

“He gave me a song!” she said. “I could not believe it. Things like that do not happen to me.”

Though she still gets nervous when she performs, she has blossomed as a singer with the choir. She has also written a book of poetry, Daughter Of Eve: The Story Of Many, which features the stories of many women at different stages of their lives.